Uppsala – The Best Climate City in the World

Uppsala Municipality is this year's global winner in WWF:s international One Planet City Challenge! We were rewarded thanks to our cross-sector sustainability interventions and a strong focus on sustainable mobility solutions. A total of 132 cities and municipalities from around the world have participated in the challenge.

Uppsala emerged as the clear global winner due to its strong, all-around performance across key competition categories. In particular, the jury appreciated Uppsala's sophisticated cross-sector sustainability interventions, as well as its strong regional leadership and efforts to share knowledge on best practices.

Although Uppsala is a small city in size, the jury felt strongly that it served as a global example of urban sustainability due to its ambitious, innovative, and science-based targets and actions, especially on renewable energy and sustainable mobility. Uppsala is systemic in its approach, collaborating with neighbouring municipalities to meet goals, for example with its metro-regional approach to mobility planning.

Read more about the city challenge and WWF on their website.

Uppsala Shows the Way to a Sustainable Future

There is a strong drive in Uppsala's climate work. Our vision is to be a "fossil fuel free city contributing solutions for global ecological recovery and prosperity".

The plan for reaching our goals is outlined in the Environmental and Climate Programme . Below is a condensed version of Uppsala's goals and milestones from the programme.

Uppsala has two major climate goals – to be fossil fuel free by 2030 and climate positive by 2050. To reach these levels we are investing in renewable fuels and set ambitious goals in our Environment and Climate Programme.

In the chart below you can see that Uppsala's emissions of greenhouse gases have gone down since 1990. The chart also shows that future expected emissions shall continue to fall according to the target levels. 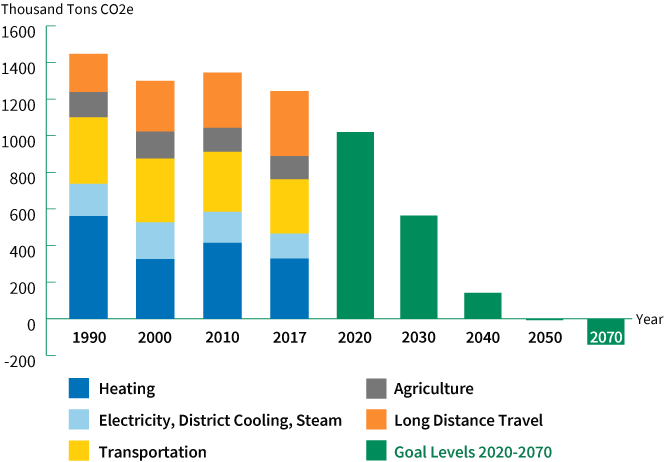 The total emissions of greenhouse gases shall:

With only a few years left to 2020 we still hope to reach the set target level. An important contribution will be the planned shift to produce heat from renewable raw material in the city's district heating production facility. However, it has been difficult to halt the increase in people's long-distance travels. The goal is dependent on keeping long-distance travel at a steady level.

Ten Milestones for a Better Climate

In our Environment and Climate Programme there are ten milestones, each with their own goals, to help us concretize the climate work and make action plans with tasks. They shall act as a driving force for a rapid development into a sustainable society and in the long run make it possible to reach Uppsala’s major climate goals.

Read more about Uppsala's approach towards sustainable development in our Policy for Sustainable Development.

A crucial part in reaching climate goals is the transition to a new energy system. Therefore, Uppsala Municipality has recently developed an energy program to show how we can achieve an environmentally, socially and economically sustainable energy system.

The programme is based on Uppsala Municipality's targets for resource efficiency, health, environment and climate, country side and city development, more jobs and environmentally-friendly business development, civil preparedness, and the strengthening of ecosystems. The energy programme is a cornerstone in making Uppsala fossil fuel free and renewable by 2030 and climate positive by 2050.

Read about Uppsala's energy transformation to 2050 in the Energy Programme.

Uppsala is growing rapidly. It is a challenge to grow and at the same time reduce emissions and climate impact. But building new areas also provides opportunities to create better conditions and solve sustainability challenges. We have listed some examples of our climate work below that have received extra attention in the One Planet City Challenge competition.

Uppsala Climate Protocol
Uppsala Climate Protocol is a local network in which companies, associations, universities and public organizations work together and inspire each other and others to secure Uppsala's long term energy and climate goals. 2015–2018 is the third programme period of the project, in which 33 members participate.

The project was initiated in 2010, when Uppsala municipality invited local actors from both the public and private sector to sign a "local Kyoto protocol". In the first programme period (2010-2012) 17 organizations signed the protocol, in the second programme period (2012-2015) there were 29 participants, from a wide number of sectors. Today the protocol is an established and effective arena for climate action and cooperation in Uppsala, and the main gathering for developing ideas how to reach the city's long-term energy and climate goals. Each member sets energy and climate goals (in sectors buildings, transports, production and other) to reach a common goal for the programme period.

During the first period (2010-2012), the common goal was to decrease the members' greenhouse gas emissions by 3.7 %. The outcome was a decrease of about 4 percent, while total turnover increased. During the subsequent programme period (2012-2015), the goal was to reduce our collective emissions by about 4.5 %. The result was a decrease of fully 11 %. For the third period, 2015-2018, the goal was to reduce emissions in total by 4,7 %. The newly revealed results shows a twice as high reduction of 10 %. The continuously superior results from Uppsala Protocol has showed that it is an effective collaboration for reaching climate goals.

Innovative New Neighbourhoods
Uppsala municipality wants to set a new standard for sustainable travel which will play an important part if the municipality's long-term climate and environmental goals are to be reached. Several major areas in Uppsala are under development to meet the expected population growth. For the new residential area, Ulleråker, a mobility action plan has been developed. Ulleråker will thus act as a forerunner and set a standard for how systematic mobility work should be carried out within Uppsala. The plan describes organization and working methods in the planning process to ensure systematic work with sustainable mobility throughout all the stages. It also explains how to monitor and evaluate goals and work processes. The plan will contribute to achieving Uppsala's ambitious goals, which, among other things, indicate that at least 80% of the inhabitant's trips will come about by walking, cycling or public transport.

Material choices in new buildings are made with regard to climate impact and reducing the negative environmental effect. A life-cycle perspective characterizes both the construction of houses and the design of public spaces. The starting point is choosing robust material of high quality and long life span. This reduces future operating costs and renovation needs.

In another new area, Rosendahl, parks and green spaces are designed to provide ecosystem services: features that benefit humans and preserve and improve living conditions and well-being for plants and animals as well. Air to breathe, food, pollination, and other values that provide quality of life and health. The water in Rosendal is taken care of locally. This means that the water is delayed and cleaned in the area's natural waters, ponds, plants, rain beds and temporary flood zones. Water is supplied to trees and plant beds and also raised in open waterways to add natural beauty.

Biking Before Driving
The Municipality of Uppsala has been focusing on cycling issues for several years. A few years ago a major analysis was carried out through focus group interviews with politicians, students, bicycle companies, bicycle dealers, major employers, etc. Also, a wide-ranging survey of residents was conducted. The result clearly showed that two areas were prioritized, namely information and communication on traffic rules and the extension of Uppsala's cycle infrastructure. In line with this, widespread efforts are ongoing, for example construction of more separate cycle paths/lanes and improvements in previously built cycling infrastructure.

Promotion and information on bicycling has made it easier to choose the bicycle as a first-hand transportation mode. This includes for example bicycling courses for both adults and children, traffic information, maps, safer bike paths to schools, and more.

An obstacle for many inhabitants whom usually enjoys biking is the Swedish winter. Biking in northern Europe is not always easy and comfortable in the winter due to the snow, icy roads and cold weather. There are however things one can do to make it safer and easier. To further encourage those who previously felt the need to use motorized transportation during the cold months the municipality started the project "Winter Cyclists". The project aims to both help individual bikers and making sure that biking lanes are safe and free from snow. Bike lanes are now the number one priority when removing snow and sanding. The bikers are also given equipment like studded tires and warm saddle covers to make it more safe and comfortable.

Uppsala Produces its Own Biogas
Since the end of the 1990s Uppsala has had its own production of biogas made from organic waste from households, restaurants and industries. Through the years, the operation has grown from producing about 100 000 Nm3 biogas a year to today's production of more than 4 000 000 Nm3 a year. It is one of the world's leading facilities for producing biogas from organic waste. Apart from being a great energy alternative biogas makes an effective use of our waste in a circular economy.

The biogas plays an important part in Uppsala's path to a fossil fuel free community. The gas is also a better alternative to conventional fuels regarding air quality and pollution. It is therefore mainly used to fuel public buses in the city area. But is also sold to private car owners and taxi companies.

More projects and climate initiatives
Below is a link to our Swedish webpage with more examples.
Read more about Uppsala's work on climate and environment

If you have any questions, please contact Björn Sigurdson.